Sycamore trust - Rooted in the Community
Donate get involved

The Magical Little Girls of Christmas

A seasonal short story, by Evie from Alpha Club 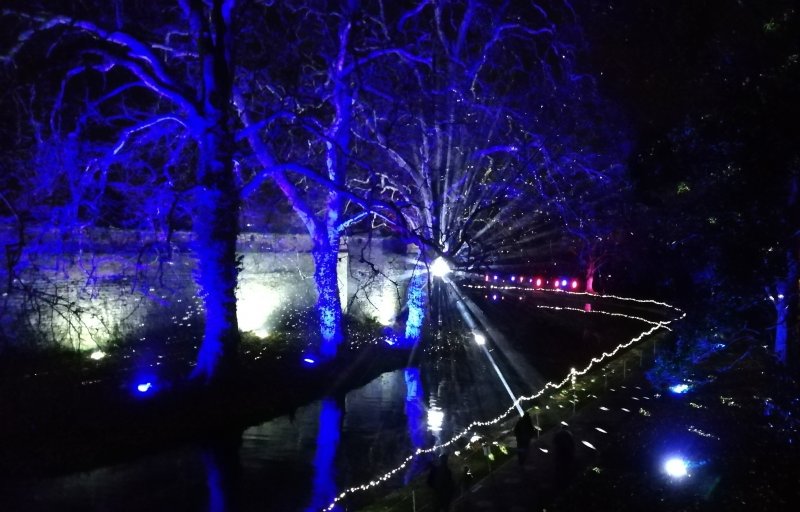 And on this snowy night she was watching the stars upon the city rooftops. And she was magic too. Only magical people could deal with the supernatural.

Adrienne Wednesday slowly got up from bed, put on a dressing gown and tiptoed out of her dormitory, past the other shivering girls. But unlike Adrienne, they were snoring and they were not magic. Adrienne was Faerie. But a Faerie cannot survive for long in a mortal’s world. All her life she had felt as though she had not belonged anywhere. And now she was going to find a place where she did. Adrienne looked rather Faeire. She had sharp, pointy little ears that stuck up and a upturned freckly nose. Her skin was a deep brown and her eyes were almond-shaped and golden-coloured. She could hear more than the other children and she had the most fantastic memory. But she had a penchant for mischief and daydreaming and had suffered many a beating from Matron’s strong rod.

It is important to explain that Adrienne did not realise this. She merely realised she was... different. For lack of a better word. And now, on Christmas Eve Night, the Faerie World was calling back to her in Elfin language. It was time for her to go home. 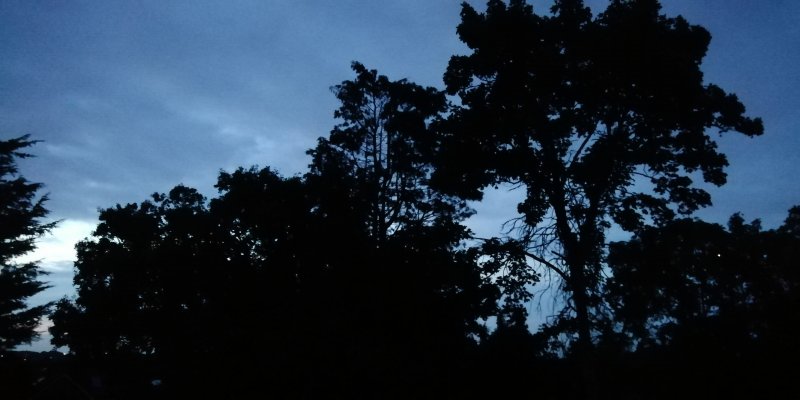 Adrienne Wednesday climbed up the stairs, following what appeared to be shimmers of glitter hovering in the air. As she took a step forwards, it faded, flickered and flinched backwards, guiding her onwards. She climbed higher and higher until she came to the orphanage’s dark and dusty attic door. It was locked but the silvery dust slipped and slid through the key hole and the door slowly opened. Adrienne Wednesday followed the dust keenly through the attic and up the spindly stepladder through the trapdoor onto the roof. The night sky was a massive blanket of darkness and the moon was a perfect circle of luminous light. The stars twinkled prettily, as though enticing to be chased and adventured after, from their many miles and light years away. The air was sharp and frosty but with the distinct smell of good tidings and the taste of gingerbread, Christmas pudding and mince pies.

Across, on the other side of the roof, was another silver glow, but paler and more timid than the Moon’s. The dust gathered around and seemed to emitting from the eerie shaped glow. When the glow saw Adrienne, the dust was speedily absorbed into it and all of the dust vanished, becoming part of the glowing whole. But it wasn’t an it. It was a girl, it’s figure composing itself now, and this girl seemed to be composed of flickering starlight and snow.

She was Ayelet. And she was obviously a sprite. “I am here to guide you to the Realm of Magic.”

“Not what you expected? We exist beyond all barriers within the known facets of Creation and we are the parting of the veils that hide the hidden.”

Ayelet smiled at this beautiful brunette. “I’m going to take you home. You’re not from this world.”

“I’ve been waiting for you.”

“I’ve been waiting for you too.”

“Where are we going? What is my home?”

“The North.” Ayelet said. “Where all the elves live.”

Something ran down Adrienne’s spine- but instead of a cold shiver it was warm, rather, and beautiful and gentle and comforting. Similar to a loving mother’s kiss or a caring father’s hug. Adrienne did not recognise it. She had no family. “I’m an elf?” Adrienne exclaimed, wrinkling her upturned, elvish nose. Ayelet reached towards her new friend, but her intangible hands could only brush against Adrienne and give her a chill.

“Yes. An elf.” Ayelet said. “And even if it doesn’t sound good, not as good as a sprite anyway, if you don’t go back... once cannot stay from their true origins and their true purpose. It is not how the universe wills it.” Adrienne took a shivery breath.

“Well, I’m certainly not happy here. And... I know this is right for me. I must be brave even if it’s hard.”

“You must be brave, especially if it’s hard.”

Ayelet offered her hand. “Come with me.” Adrienne took Ayelet’s hand and underwent a magnificent transformation. Ayelet had been granted Elfin magic for one night and this awakened Adrienne’s true self. And then they flew. First they went over the dark, smoky rooftops of London, past the Elizabeth Tower, where they perched upon a clock hand until Big Ben within gave a boom and the hand rattled. They floated past Buck House, carefully fading away into the dark when the guards looked up. Then it was over the murky Thames past the majestic Tower of London. They gave Anne Boleyn a wave, her head tucked under her arm, held precisely in her hand and a slice of ghostly Christmas Cake in the other. They shot up into the inky midnight sky, speckled with starry jewels and delicate wisps of white cloud. They passed through these masses of moist candyfloss, playing hide-and-seek. Over fields and meadows and fens and hamlets and villages and towns and more cities they went, revelling in the bliss of the icy wind in their hair and the fact that the night was there. They only had the silvery moon to guide them but this was enough and they went further and further north. The clouds grew darker and fatter and snow began to grace them, twirling down to the ground like ballerinas pirouetting on a stage. As they exhaled bursts of pure white condensation wrinkled the air in front of them and as they shivered, the snow upon their back shimmered to the ground. Below they was now a churning mass of dark sea and above them only the foreboding clouds. The moon was gone and only thin traces of the Aurora Borealis- amethyst-violet, emerald-green, shiny yellow, wispy white floating fires- guided them. But Ayelet knew where to go.

For a while it grew darker and darker... And then! A smattering of distant light. Red. Then green. Then gold! It grew bigger and closer and warmer and brighter. Christmas Land! They glided gracefully to the ground, in a clearing of a dense forest. They walked further until they came to two massive candy-canes popping out of the ground, slanted so they brushed one another at the top. Between them was strung a crimson and virescent sign that read: CHRISTMAS LAND- HOME OF FATHER CHRISTMAS AND THE ELFIN PEOPLE. 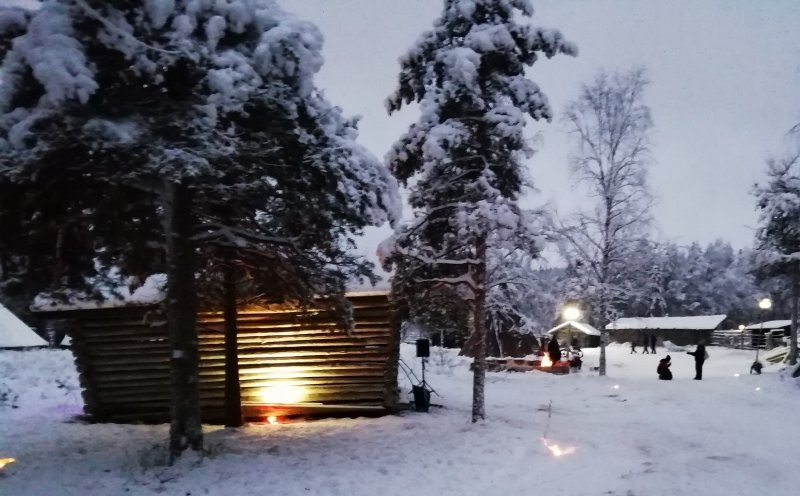 As they walked through the candy canes, they came upon dainty small little houses, arranged in a circle and stretching out for miles beyond- of a gingerbread colour and an enticing beauty. In the centre of circle was a massive, glimmering, reflective ice rink and just behind that, a magnificent ice statue of a rotund, rosy-faced man dressed in robes of red that stood a few metres before a large clock tower and city hall. The clock‘s tower‘s five- yes, five- golden hands pointed not to twelve number but to twelve, intricately-drawn Christmassy objects. A nutcracker, a angel, a gingerbread man, a robin, a snowman, a Elfin hat, a Christmas Pudding, a chocolate coin, a ballerina, a Christmas Tree, a silver star and finally, a partridge in a pear tree. And then, all at once, people- with curly hair and upturned noses and bright eyes and lithe fingers- all came rushing out of the gingerbread buildings, carrying golden plates of food and bright crackers and painted party blowers. They were all cheering excitedly. Out of the town hall came six imposing figures, all led by a man in red- the first was the dimpled Mother Christmas, smelling of gingerbread and spice, wearing frilly skirts of emerald and gold; the second was The Snow Queen, regally adorned in silver ice and in a gown of periwinkle and blue; the third was the Sugar Plum Fairy Princess in a pink tutu and ballet slippers, constantly walking on en pointe and had yummy sweets rather glamorous jewels around her neck, wrists, ankles and head; the fourth was Jack Frost, dressed in white shorts, who had icicles growing out of his nose and snowflakes upon his eyelids and eyelashes; the final was Krampus, who stomped along moodily behind. The man in red, trimmed with pure white fur, with a matching warm cap on his head and smooth black boots, was Father Christmas. “Ho! Ho! Ho! Welcome Home!”

Christmas Day was merry, as it always was in The North. Father Christmas gave all their Christmas wish - Adrienne a family; good food; a good party; marvellous presents; love letters from sweethearts; sweets from siblings; cuddles from parents; gingerbread from grandparents; cards from friends; charity for the unfortunate; and Ayelet received a corporal body and the ability to land, as all sprites wish for upon Christmas. She was not the only one at the Christmas Ball in The North, which was a popular place for the Aware to be. Anyone who was Aware of all the realms could probably travel between them and hence most went to The North for the day. There was nowhere more Christmassy than The North. 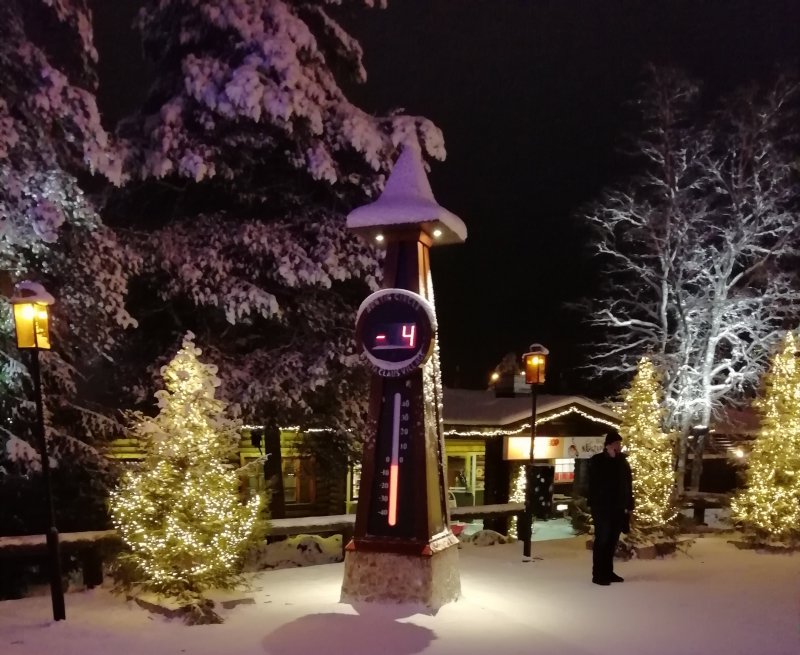 Christmas Morning came and the two girls danced together, dancing waltzes, swing jives, jazz, jigs, hops and the polka as the snow came floating and twinkling to the ground, organised by the Snow Queen and her white wolves. Christmas Noon came and the girls ate a magnificent feast- one of turkeys, geese, chickens, beefs, porks, gammons, ducks, peas, Yorkshire puddings, sausages, carrots, parsnips, cauliflower cheese, pigs-in-blankets, stuffing, broccolis, cauliflowers, gravy, plum puddings, Christmas Puddings, chocolate logs, hot chocolates, elderflower wine, teas and cheese and crackers were upon the main menu and all feasted upon each. Christmas Afternoon came and the presents were handed out and opened and everyone received a tangerine and candy cane from Father Christmas, as per tradition, and gingerbread and pastries from Mother Christmas and sweets and chocolates and sugars from The Sugar Plum Fairy— then came the Christmas festivities led by Jack Frost (the Christmas Market, light display, ice skating, baking, pass-the-parcel, musical statues to name a few) which were hard to win but fun nevertheless. Christmas Evening came and the elves sung carols which they taught to Adrienne and slowly Ayelet’s wish began to fade. Not even Father Christmas can defy the laws of the universe if it is not meant. He and Adrienne wished Ayelet goodbye, until another Christmas.

Ayelet lingered just on the edge of the tips of Adrienne’s old world. She sat upon the rooftops and looked over her beloved realms. She sat and watched the sun rise in the sky. Then she went flying off to help her next friend.